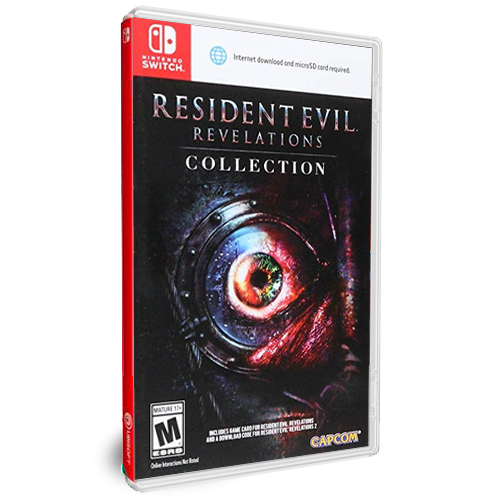 Please note: this is the NTSC version of the game which is compatible with PAL systems. Any future DLC may require a US Nintendo account.

Survival horror makes its way to Nintendo Switch with Resident Evil Revelations. In addition to the thrilling conspiracy storyline featuring series favorite Jill Valentine, this package also includes the fan favorite Raid Mode. Raid Mode, which was first introduced to the series in the original version of Resident Evil Revelations, sees gamers play online in co-op mode or alone in single player taking on the hordes of enemies across a variety of missions whilst leveling up characters and earning weapon upgrades.

The critically acclaimed survival horror title takes players back to the events that took place between Resident Evil 4 and Resident Evil 5, revealing the truth about the T-Abyss virus. Resident Evil Revelations features series favorites Jill Valentine and Chris Redfield, plus their respective BSAA partners - Parker Luciani and Jessica Sherawat. The action begins on board a supposedly abandoned cruise ship, the Queen Zenobia', where horrors lurk around every corner, before players head for the mainland and the devastated city of Terragrigia. With limited ammo and weapons available, the race is on to survive the horror of Resident Evil Revelations.