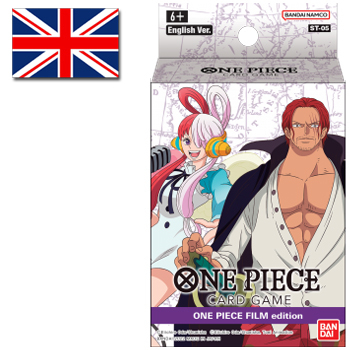 The FILM All-Star Deck commemorating the release of the movie "RED" is now available!
This all-star deck features characters from the four films that have been released so far, including "STRONG WORLD", "Z", "GOLD", and "RED"!

Popular characters from ONE PIECE FILM, including Shanks and Uta featured in RED, are now available!
Battle against your opponents while enjoying the history of the series!

All cards comes with new text!
Including cards that can enhance other Starter Decks, Booster, and more!
Get into the competition right away with this powerful deck!


Each deck contains the following: